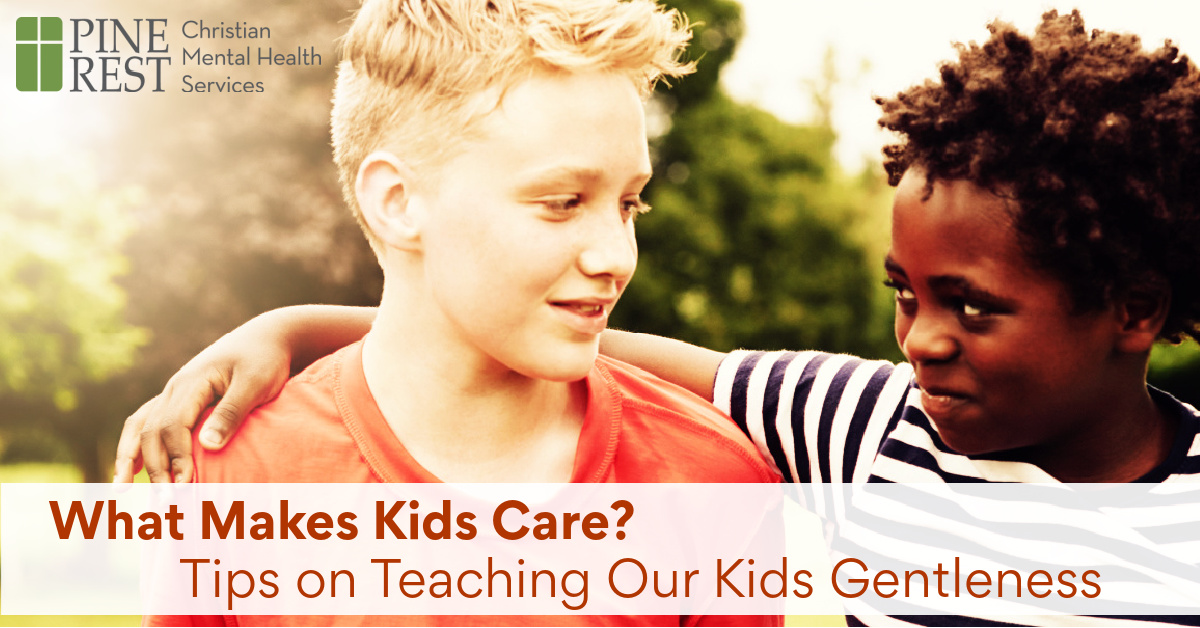 In a world where violence and cruelty seem to be common and almost acceptable, many parents wonder what they can do to help their children to become kinder and gentler—to develop a sense of caring and compassion for others.

Raising kids who care isn’t a solution to violence by itself, but it’s reasonable to worry that being exposed to a lot of violence—whether it’s on television or on the streets—could make your children hard and uncaring.

Parents, of course, can’t completely control all the things that affect their children’s lives. After all, children spend a lot of time out in the “real world,” which can often be harsh, uncaring or just plain unhappy. And children have their own personalities and characteristics that parents can’t change or control. But there are some things that a parent can do to encourage their children to become caring, fair and responsible.

People sometimes think that children don’t really see the outside world—or other people—the way adults do, that they only view the world from their own eyes and in their own way. But is this true?

Researchers used to believe that a sense of real caring about others only came as people grow into adulthood. But now studies are finding that children can show signs of empathy and concern from a very early age. They react with concern when they see unhappiness, wanting to help or fix the problem.

And one study found that teenagers who were involved in helping others felt very positive about their lives and had high hopes for their own futures.

What adults can do

The most important thing you as a parent can do is to let your children know how much it means to you that they behave with kindness and responsibility. When you see your child doing something that you think is thoughtless or cruel, you should let them know right away that you don’t want them doing that. Speak to your child firmly and honestly, and keep your focus on the act, not on the child personally—something along the lines of “What you did is not very nice” rather than “You are not very nice.”

This emotional reaction needs to be accompanied by information—some explanation of why you disapprove. For example, “Look, Joey is crying. He’s crying because you took his toy away. That wasn’t a very nice thing to do!” or “It hurts the cat when you do that; that’s why he scratched you. It isn’t kind, and I don’t want you to do that any more!”

It’s important to let children know how deeply you feel about their behavior toward others. If they see that you have a real emotional commitment to something, it’s more likely that the issue will become important to them, too.

Be frank, honest and upfront with your kids about what kind of behavior you do and don’t like. Keep your comments short and to the point; the idea is to teach them, not to make them feel guilty.

According to another study there are two kinds of parental role modeling that help teach children to be caring: kindness to others and kindness to the child.

In other words, our actions speak louder than words.

If you are consistently caring and compassionate, it’s more likely that your children will be, too. Children watch their parents, and other adults, for clues on how to behave.

Keep in mind that if you say one thing and do another, your children will pay a lot more attention to what you do. The old warning “Do as I say, not as I do” simply does not work, particularly when it comes to teaching about caring.

Try to surround your children with other people who are kind and caring, so that they have several role models.

If you treat your children with respect for their dignity, concern, and regard for their achievements, you help them understand that all living creatures should be treated with dignity and concern.

Parents understandably worry that their effort at home could be undermined by outside influences such as their children’s friends, daily violence in their own neighborhoods, television shows and movies, or a culture that exalts “heroes” who are selfish.

How to help counteract negative influences:

Another thing you can do is try to find organized ways for your children to get involved. Let them know about places in the community where they can volunteer, and encourage them to join. Many volunteer organizations and churches have special programs for young people and even for children.

Some parents whose children are confronted with the harsher realities in everyday life may wonder whether it’s a good idea to let them see even more suffering and distress. Other parents may worry that exposing kids to a harder side of life than they’ve seen before could traumatize the children.

These are understandable concerns, and according to some experts, there are cases where children have become overly sensitive to the suffering of others. This is particularly true of children who are already emotionally fragile. Not all giving is healthy for the giver; if a child starts placing the needs of others above his own, this could be a sign that perhaps he or she is giving too much.

What most inspires a child to grow up caring about others is the caring that the child receives. That nurturing is itself a perfect role model for children.

Experts point out that when children feel they have a secure base at home, they’re more likely to venture out and pay attention to others. It’s when they feel deprived of love and nurturing that they focus too much on themselves and their own needs.