If you are seeking assistance with addiction treatment, call 866.852.4001 or visit the Pine Rest Addiction & Recovery microsite at pinerest.org/addiction. 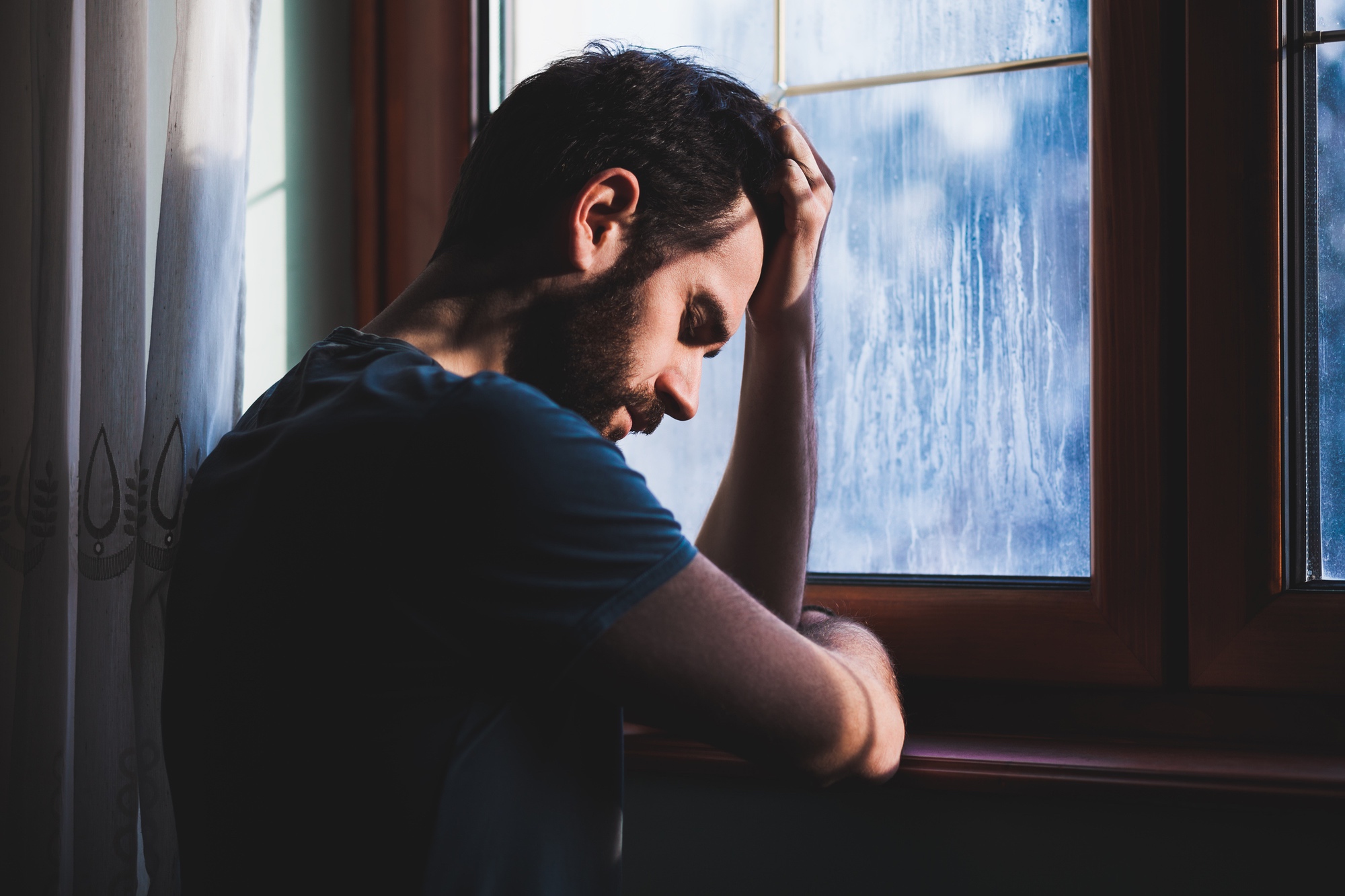 Our present problem with opiates began a couple decades ago when it was decided that people had a right to be pain free. Pain became the fifth vital sign. Although an admirable goal, this quickly became a rallying cry from society, the media and medicine.

Physicians responded by prescribing several new opioid “pain-killers” that were mistakenly felt to be “safe” and not addictive. Slowly it became disturbingly clear—not only was it often not possible to completely eradicate pain, but that aggressively trying might be dangerous. Everyone began to awaken to the fact that opioid pain medications could cause addiction and, in fact, could cause patients to stop breathing.

As prescription opioids became harder and more expensive to get in the U.S., many turned to heroin to manage their pain and their withdrawal symptoms. We have all seen the toll … across the nation, the state, in our communities and perhaps own families. Addiction has become widespread among all ages and incomes, and fatal over doses rose dramatically. From 1999 to 2014, overdose deaths in Michigan increased from 62 to 568 per year for prescription opioids and from 37 to 433 per year for heroin-related deaths.

Seven people died in Michigan each day of 2018 from a drug overdose. 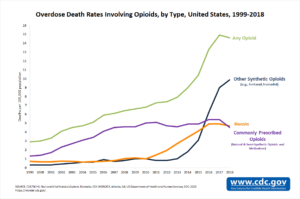 Signs of overdose when a person is conscious and “high”:

Signs of overdose when a person is unconscious:

If person is showing signs of overdose, it is critical that that basic life support and naloxone are administered as soon as possible. If you do not have naloxone, call 911 immediate or take the person to a hospital emergency room.

In order to encourage people to get this life saving support for a friend who is showing symptoms, Michigan has a good Samaritan overdose immunity law providing immunity from arrest, charge or prosecution for certain controlled substance possession and paraphernalia offenses when a person who is either experiencing an opiate-related overdose or observing one calls 911 for assistance or seeks medical attention.

Why are so many becoming addicted?

Understanding addiction is key to addressing the issue. The simple definition of an addiction is simply a loss of control over a substance or a behavior. The reality is that addiction is a chronic brain disease. It is not curable. It is progressive, relapsing and finally, fatal.

The Diagnostic and Statistical Manual of Mental Disorders, Fifth Edition (DSM-5) has several criteria for medically making the diagnosis of an addiction or substance use disorder. In short, the substance or behavior becomes more important than anything else in a person’s life. The recently-released DSM-5 took substance abuse and addiction and combined them into Substance Use Disorders and offered several criteria for making the diagnosis of a mild, moderate or severe.

The disease of addiction lives in the midbrain and is mediated by the “pleasure center”. This part of our brain is powered by dopamine and is important in rewarding us with a pleasurable feeling when we do the right things in life such as work hard, eat food, drink liquids, exercise and love each other. Since it helps us make life preserving decisions it is very influential.

When pleasure-producing substances such as heroin, alcohol or cocaine are used, this pleasure center is hijacked. Normally rewarding activities no longer create a pleasurable feeling. Only more of the “hijacking” substance produces the desired effect.

Along with the pleasure center, the midbrain contains the amygdala (which is responsible for feelings and emotions) and the hippocampus (important for memories). The pleasure center, amygdala and hippocampus communicate with each other constantly.  Negative feeling and powerful memories of “being high” create often unbearable cravings and lead back to use on a regular basis and relapse.

The midbrain does not recognize consequences but becomes a guiding force in the life and behavior of an addict. The thinking and decision-making part of our brain is the prefrontal cortex. This is the “good choices” part of our brain. Brain imaging studies show that in people with addictions the prefrontal cortex is not getting a lot of exercise and is metabolically less active than the midbrain. This explains the often-outlandish behavior of people in active addiction.

Opiates are highly addictive and although the consequences or use can be dire, they can also be very challenging to stop using because of the illness caused by withdrawal. 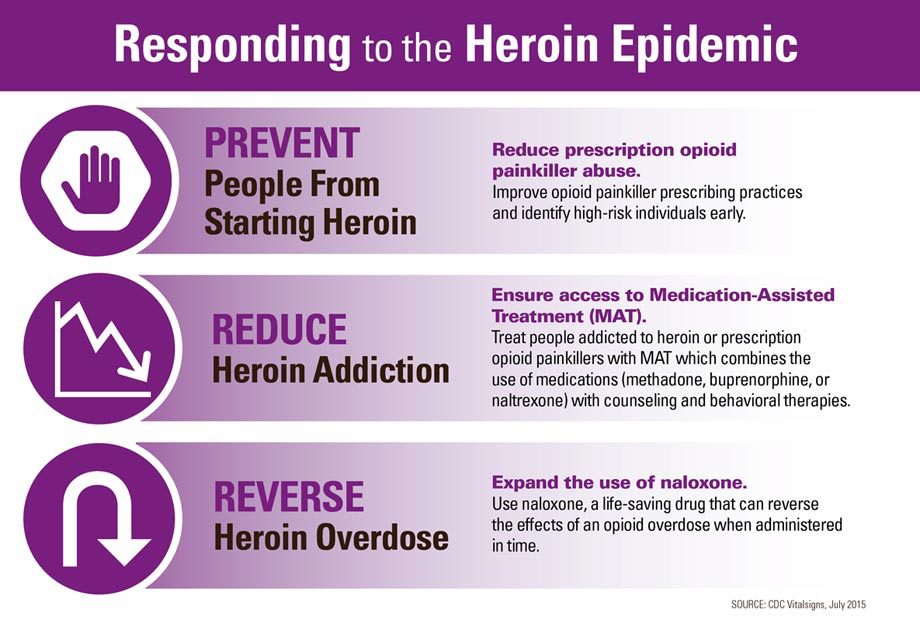 The process of recovery does not end with detox. During addiction, abnormal brain adaptations have occurred creating tolerance, dependence and cravings that can recur years later. Relapse is frequent (85% in 6 months). Ongoing treatment of this chronic brain disease is required in order to reduce or eliminate relapse.

Medication-Assisted Treatment (MAT) is the use of medications, in combination with counseling and behavioral therapies, to provide a “whole-patient” approach to the treatment of opioid use disorder.

Research shows that a combination of medication and therapy can successfully treat these disorders, and for some people struggling with addiction, MAT can help sustain recovery. MAT has proved to be clinically effective and to significantly reduce the need for inpatient detoxification services for individuals.

The ultimate goal of MAT is full recovery, including the ability to live a self-directed life. This treatment approach has been shown to: 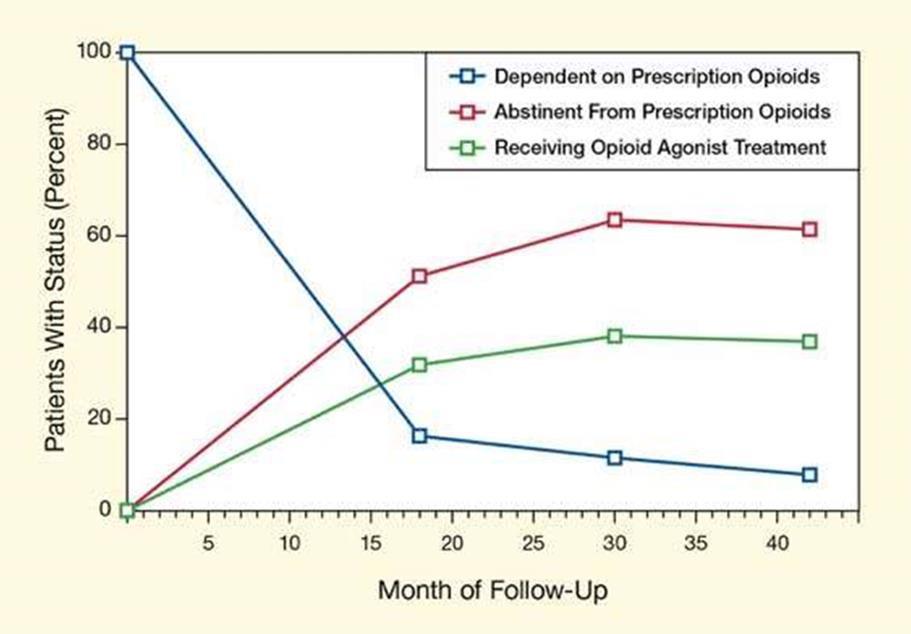 Dependence on pain relievers dropped below 20 percent at 18 months, and below 10 percent at 42 months, after patients were stabilized on, and then tapered off, Bp/Nx. At all three follow-up points, patients who were currently engaged in opioid agonist therapy had markedly higher odds of positive outcomes.

A common misconception associated with MAT is that it substitutes one drug for another. Instead, these medications relieve the withdrawal symptoms and psychological cravings that cause chemical imbalances in the body. MAT programs provide a safe and controlled level of medication to overcome the use of an abused opioid. And research has shown that when provided at the proper dose, medications used in MAT have no adverse effects on a person’s intelligence, mental capability, physical functioning, or employability.

Methadone, buprenorphine, and naltrexone are used to treat opioid dependence and addiction to short-acting opioids such as heroin, morphine, and codeine, as well as semi-synthetic opioids like oxycodone and hydrocodone. People may safely take medications used in MAT for months, years, several years, or even a lifetime. Plans to stop a medication must always be discussed with a doctor.

Methadone tricks the brain into thinking it’s still getting the abused drug. In fact, the person is not getting high from it and feels normal, so withdrawal doesn’t occur.  Methadone is federally licensed and a potent tool for opioid use disorder treatment. Toxic overdose is much more likely when methadone is used to treat pain. Stigma still remains, however, and the number of methadone clinics is limited and difficult to access in rural areas

Buprenorphine suppresses withdrawal symptoms and cravings so the individual can participate in therapy and start positive changes in their life. Once stable, buprenorphine patients regain control of their medication use, do not use compulsively, do not suffer persistent cravings, and do not use despite harm. Buprenorphine comes in a film or tablet that is placed under the tongue.  This medication is now produced by several pharmaceutical companies under the names Suboxone, Zubsolv, Bunavail as well as generics. Patients are counseled to avoid sedating drugs such as alcohol, cannabis, etc.

Buprenorphine is safer than other opiates prescribed by healthcare professionals and is easily given by physicians in their office. A patient can remain on buprenorphine for as long as one remains on methadone.

FDA approved for treatment of both alcoholism (2006) and opiate addiction (2010), Vivitrol blocks the opiate receptors in the brain, removing the sensation of pleasure. In opiate addiction, the patient on Vivitrol/Naltrexone will not experience the sought-after euphoria opiates produce. They may also not experience any euphoria when thinking about using. This process can diminish the craving for alcohol and opiates in addicted patients. It’s not a controlled substance and is administered in monthly injection or in a 50-mg pill (naltrexone) for daily dosing.

Our understanding of addiction is improving as is our ability to treat it. More physicians are becoming interested in treating substance use disorders such as opiate and alcohol use. The American Board of Addiction Medicine was founded a few years ago and is certifying several hundred doctors every year to offer treatment in this new specialty. As communities come together, we will gather new ideas from people in and out of medicine. Everyone plays a role in coming to grips with this common and tragic illness.

For more information about addiction and treatment, call 866.852.4001 or visit the Pine Rest Addiction & Recovery microsite at pinerest.org/addiction.

Bruce C. Springer, MD, specializes in treatment of addictions and is a physician in Pine Rest’s Addictions Services and brings more than 30 years of experience to the field.