Clinical trials have demonstrated the safety of TMS Therapy in treating patients who have had an inadequate response to prior antidepressant medications.

Treatment caused very few side effects and was generally well tolerated by patients. The most common side effect reported during clinical trials was scalp discomfort—generally mild to moderate and occurring less frequently after the first week of treatment. 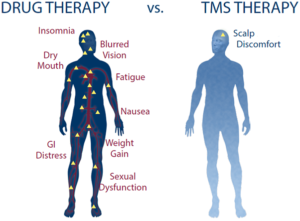 Fewer than 5% of patients discontinued treatment due to adverse events.

Over 10,000 active treatments were performed across clinical trials demonstrating its safety.1