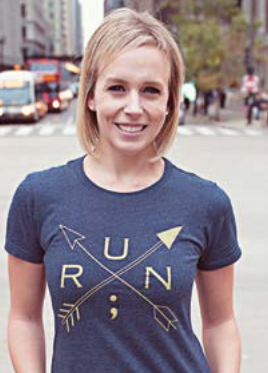 I was first diagnosed with depression and anxiety during my freshman year of college. The only thing I did at that time was start taking an anti-depressant. I didn’t want to deal with the depression. Almost 10 years later, my life came crashing down. My depression completely took over, and I spent a week at Pine Rest in their adult inpatient services getting treated for my depression.

It took another year of letting my depression and anxiety take over before I could fully admit I had a mental illness and would need more than an anti-depressant pill to live a healthy life.

It was then I noticed a pair of brightly colored running shoes in the corner of my room. I put them on, laced them up, and started dealing with my mental illness. Each day I put one foot in front of the other. I also registered for a 5K; it helped hold me accountable to running.

It wasn’t always easy. Some days I wanted to stay curled up in my bedroom alone. But more than that I wanted others to know it’s possible to manage their anxiety and depression, and being physically active will help that.

In 2015, I ran my first marathon (and have run two others since then). After my first 20 mile training run, I got a tattoo I had been wanting. My tattoo says ‘Still ; Run,’ with the semicolon signifying there is more to my story than my mental illness, and I’m able to be active and healthy even though I have depression.

Driven by wanting to share my story to help others, I launched an organization and running group in November 2016 called Still I Run. The idea is to bring others together who struggle with their mental health and to stop the stigma that comes with mental illness. The organization sells items such as T-shirts and bracelets with 20 percent of the proceeds benefiting Pine Rest’s Patient Assistance Fund (PAF). I chose PAF to receive part of the proceeds because Pine Rest and running saved my life, and I don’t ever want money to be a reason someone does not get the help they need.

Get Connected with Still I Run

Pine Rest is running to raise mental health awareness during the 40th Annual Fifth Third River Bank Run on May 13, 2017!  Learn how you can get involved at www.pinerest.org/RUN. 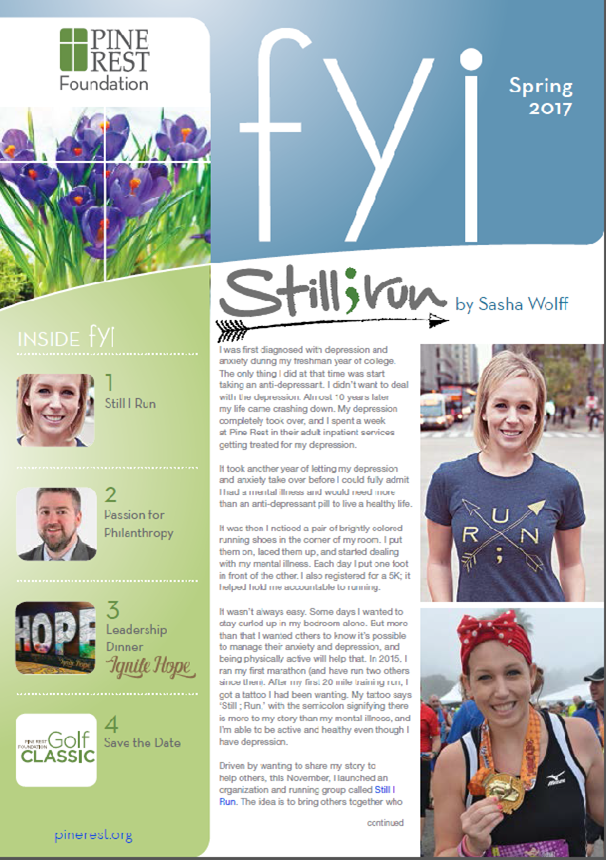 This article originally appeared in the Spring 2017 issue of FYI, a newsletter of the Pine Rest Foundation.

To see more patient stories, to find upcoming events and learn how you can get involved, visit www.pinerest.org/foundation.