Many think of combat veterans when talking about post traumatic stress disorder (PTSD). However anyone who witnesses or experiences an event or events that involve actual or threatened death, serious injury or sexual violation is at risk to develop PTSD. These events can be as wide ranging as a car accident, natural disaster, witnessing a crime, workplace accident or traumatic birth experience. Individuals who learn of a close relative or friend involved in death or threatened death and professionals (e.g. first responders) repeatedly exposed to the traumatic details can also be diagnosed with PTSD.

In order to be diagnosed with PTSD, a doctor or clinician will look for symptoms from each of four symptom clusters: intrusion, avoidance, negative alterations in cognition and mood, and alterations in arousal and reactivity.

The symptoms adults experience may vary. For a few people, the symptoms become so severe they cannot take care of themselves.

Children may show symptoms like repetitive play or physical problems such as stomachaches and headaches. Just as the symptoms differ, so does the onset of PTSD. While symptoms typically appear within three months of the traumatic event, it can be many months or even years later that people begin to have problems.

The good news is that PTSD can be treated. If someone you know experienced a trauma, encourage them to get help dealing with the event. The sooner they talk about it and work on it, the better off they will be and the less likely they are to experience PTSD. 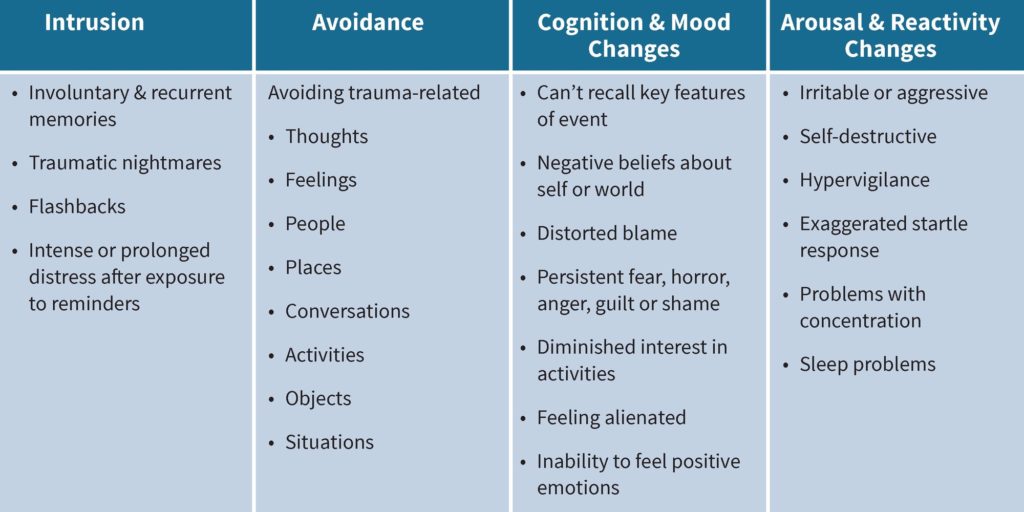