Alzheimer’s Disease and other forms of Dementia.

Dementia is a broad term for any medical condition that causes memory problems and problems with at least one other brain function, such as speech, concentration, or more complex thinking involving problem solving, planning and organization. Two of the most widespread forms of dementia are Alzheimer’s disease, which accounts for 60 percent of those with dementia, and vascular dementia which accounts for 20 percent. In 2017, 5.5 million in the U.S. were estimated to have Alzheimer’s; this number is expected to rise to 16 million by 2050.

Want to learn more? Download a copy of our Dementia Insights magazine below, or check out our Dementia Resources in the green bar above.

Although there are many exciting treatment possibilities being studied, there is not currently any way to stop or reverse the symptoms in most types of dementia. But because some dementias can be the result of reversible medical conditions, the first phone call should always be to one’s primary care physician to discuss the symptoms.

Though a cure does not exist, there IS current treatment with a medication that helps injured brain cells work more efficiently, and there is a second kind of medication generally administered later in the process that can keep some healthy brain cells from dying. 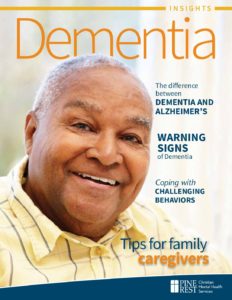 Because treatments are most effective when started early, it is critical to get an early diagnosis.

Once a diagnosis has been made, the next step is to consider the most appropriate form of treatment.

Becoming well-informed about the disease is another important long-term strategy. Search out programs or resources that help you learn about various stages of dementia and Alzheimer’s and about flexible and practical strategies for dealing with difficult situations.

How Pine Rest Can Help