What Are Perinatal Mood and Anxiety Disorders?

These disorders are a significant change of mood that can include depression, anxiety or increased energy (manic behavior) anytime during or after pregnancy. Symptoms can include irritability, change in sleep or eating patterns, obsessive worry or scary thoughts. 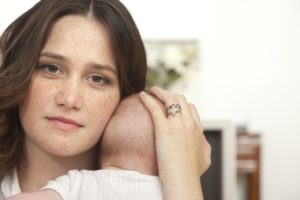 Some women have never experienced anything like this. Others may have experienced anxiety or depression before, and it is worsened during or after pregnancy. Sometimes symptoms can also include suicidal or other scary thoughts or, in rare cases, psychosis.

Although the most common complication of childbirth, PMAD often goes untreated, causing serious complications for moms, babies and families, including disruption in mother-baby bonding, interruption in the infant’s development, and family and relationship conflicts and in serious cases, it can lead to suicide or infanticide. The World Health Organization reports women are at greater risk of suicide the year after they give birth than any other time of life.