As someone’s ability to think, remember or communicate declines, his or her ability to understand and respond appropriately to a situation becomes impaired. This often leads to trouble-some behaviors, known as behavioral “acting out,” or what professionals call “need-driven behaviors.”

Challenging behaviors can include repetition, resistance, suspicious delusions, confusion, wandering, agitation and verbal or physical aggression. There are often changes in eating and sleeping schedules as well.

Behaviors may lead to erratic, unpredictable and uncontrolled outbursts. However, behaviors have a purpose and are often triggered by un-met needs and the inability to communicate those needs. Persons with dementia may wander aimlessly. Are they trying to find their children, parents or spouse? Are they agitated, because they have a physical complaint and can’t communicate it? Did they become aggressive when a caregiver they no longer recognize is attempting to undress them? Is the room too hot, too cold, too noisy or is a task too overwhelming?

When need-driven behaviors occur in someone with dementia, it is important to try to understand why this is happening. Identifying the triggers may help in offsetting the behaviors and controlling the cascade of events. It is helpful to document what happens before and after the behavior occurs to provide clues to the need being expressed or the goal being pursued. Charting these episodes allows caregivers to actually “see” and track patterns, which can help in developing new approaches and preventing the behavior. 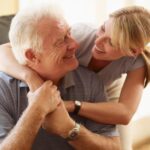 Once patterns are determined, caregivers can make adjustments in approaches and routines. Strategies to cope with cognitive changes that come with dementia can prevent the chronic stress and loss of control that can lead to challenging behaviors.

Keeping a daily routine can help produce a sense of predictability and security. Increasing socialization, introducing therapies such as music, exercise or pets, making subtle changes to the person’s environment (such as limiting noise and activity), and focusing on the person and not the task, can reduce the likelihood of problematic behaviors. Adjusting expectations to match the capabilities of someone with dementia will also help avoid frustration.

Medical illness may be the cause of a marked and rapid decline or sudden onset of behavioral issues in a person with dementia. Often this sudden change, which is called “delirium,” may be due to an easily identifiable and treatable problem such as an uncomplicated urinary tract infection, mild dehydration, pain, constipation, a common cold, a sore throat, itchy skin or lack of sleep. Seek help immediately if you notice a sudden change in a person with dementia.