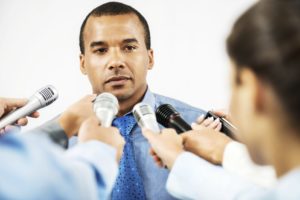 More than 50 research studies worldwide have found that certain types of news coverage can increase the likelihood of suicide in vulnerable individuals. The magnitude of the increase is related to the amount, duration and prominence of coverage.
As organizational leaders, we can and should learn from these media studies and shape our written and verbal communication in a preventive way.

Media Guidelines: Risk of additional suicides increases when the story explicitly describes the suicide method, uses dramatic/graphic headlines or images and/or features repeated/extensive coverage that sensationalizes or glamorizes a death.
Covering suicide carefully, even briefly, can change public misperceptions and correct myths, which can encourage those who are vulnerable or at risk to seek help. When reporting news of a suicide, be careful to:

Leadership Application: Talk about suicide in a way that assumes the recipient will handle the information in a mature, responsible, life-giving way. When dealing with youth, adults have a tendency to avoid any reference to suicide – the rationale being, “We didn’t want to give them the idea.”
Wrong! They already have the idea…especially immediately following a death by suicide within their social circle. Avoiding the topic lends it negative power. Discussing suicide carefully, even briefly, can change public misperceptions and correct myths, which can encourage those who are vulnerable or at risk to seek help.
It is better to fully acknowledge the loss, but emphasize what is being done to support those who are impacted. Change your language from “committed suicide” or “successful/unsuccessful suicide” to “died by suicide” or “completed suicide.”

Media Guidelines: Avoid reporting that death by suicide was preceded by a single event, such as a recent job loss, divorce or bad grades. Also, avoid describing a suicide as inexplicable or “without warning.” Reporting like this leaves the public with an overly simplistic and misleading understanding of suicide.
Leadership Application: Suicide is complex. There are almost always multiple causes, including psychiatric illnesses that may not have been recognized or treated. However, these illnesses are treatable. Refer to research findings that 90% of people who have died by suicide had mental and/or substance use disorders.
Most, but not all, people who die by suicide exhibit warning signs. Identify a list of common suicide warning signs. Consider quoting a suicide prevention expert on causes and treatments.

Media Guidelines: Do not cite the content of the suicide note or any “manifesto.” Better would be: “a note from the deceased was found and is being reviewed by the medical examiner.”
Leadership Application: Communicate, communicate, communicate, but determine what content to ultimately share on a “what is helpful/need to know” basis. Thoughtful leaders should always prioritize respectful adherence to the needs and wishes of the family.

Media Guidelines: Use your story as an opportunity to inform readers about the causes of suicide, its warning signs, trends in suicide rates and recent treatment advances. Include means of accessing resources.
Leadership Application: Knowledge offers healthy power. Have a hopeful, caring, life-giving tone. Talk about available treatment options. Share stories of those who overcame a suicidal crisis. Offer resources for help. Emphasize faith practice and spiritual strength. Include up-to-date local and/or national resources where people can find treatment, information and advice that promotes help-seeking.
Following a death by suicide, we all become “first responders.” Rather than allowing ourselves to become overwhelmed by such a tragedy, let us focus our efforts on preventing further tragedies.

Bob VandePol, MSW serves as Executive Director the Pine Rest Employee and Church Assistance Programs which provides Critical Incident Response services to business, organizations, schools and universities as well as faith communities. Active as a keynote speaker, Mr. VandePol has published and been quoted in business and clinical journals, co-authored book chapters addressing workplace response to tragedy and has been featured as subject matter expert in numerous video training series.